THE FISHTOWN RACE TAKES A BREAK

After the successful jubilee race no. 60 on 4 and 5 June, 2017, the tradition-rich Fischereihafen-Rennen (also known as “Fishtown Race” oder “Fishtown TT”) in Bremerhaven, Germany’s biggest motorcycle roadracing event, takes a break. In spite of early and continued efforts by the race organizers, it was impossible to achieve a sufficient level of planning reliability with the responsible body for track licensing, the Deutscher Motorsportbund (DMSB).

There already had been problems during the run-up to the 2017 race: In spite of intense efforts by the race organizers of the MSG Weserland e.V., they had to wait until March 2017, barely three months before the race, before an on-site meeting for track homologation with DMSB officials could take place. The additional security measures demanded by the DMSB after this meeting resulted in significant, 6-figure additional cost. It was a genuine tour de force for the entire organization team to procure the newly required concrete elements and metal fences on time for the race and to implement the required changes.

The Fischereihafen-Rennen’s request of the DMSB for 2018 was clear: early granting of the required track license, resulting in reliable planning conditions at a sufficiently early date for the next race. Unfortunately, this request has been denied, as DMSB sports director Michael Günther confirmed again in a telephone conference on Tuesday (12 December).

„As we have pointed out repeatedly and in great detail to the responsible officials, both verbally and in writing, the DMSB’s proposal to plan such a complex and costly event on the base of verbal promises and a preliminary track license is no reliable basis for our work”, said Hinrich Hinck, race manager, chairman of the MSG Weserland and CEO of the German Road Racing GmbH. “A race this big has a long lead time. Neither our dedicated fans nor the drivers nor our team and the city of Bremerhaven can be expected to worry until literally five minutes before the race if the required license really comes or not. In 2017 as well as in preceding years, DMSB officials have repeatedly pointed out the extremely high security standard and quality of our work. It is beyond our imagination why the DMSB insists on a procedure that makes it possible to deny the track license until the very last second, which would result in a cancellation of the entire race. We miss a spirit of pulling in the same direction. Shouldn’t we all have the same mutual goal: to advertise motorcycle racing in Germany in the best imaginable way?”

Hinck did not rule out the continuation of the Fischereihafen-Rennen at a later date: “We are grateful for the extraordinary level of support from fans, drivers, the city of Bremerhaven and the Fischereihafen-Betriebsgesellschaft (FBG – the operating body of the fishery port in which the race is located). I would like to thank them all, as well as our outstanding team and our partners and sponsors who have supported this event over the years. In our hearts, we all wish for a long and successful future for this great racing tradition. Together with the city of Bremerhaven and other partners we will be looking for ways to make this future possible. The tremendous popularity of the race with both spectators and drivers from all over Europe is a clear indicator that this future is dear to a great many people. As our claim says: LOUD. RAW. REAL. The way we all have come to love the Fischereihafen-Rennen.” 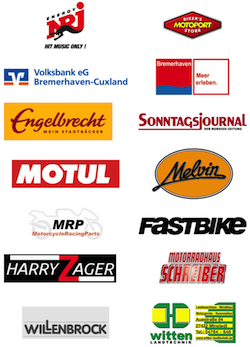